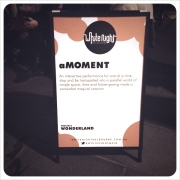 Little as we were in the scheme of things, White Night was a memorable evening. With lots of moments happening for people all across the city in different ways.
Our heart skipped thinking about it all.
The lights. The foam. The water. The streets. The music. The conversations. The friendships formed. The dancing. The breadth of people. The beginning of something special.

Situated opposite the magnificent electric canvas work on Flinders St, we had  a beautiful view and evening.
Never have we had this many people peek through our windows.
Nor, had people queuing for an hour to experience it. (happily queuing, this wasn’t the grumble grumble sort)

The bells tolled at 7pm and very quickly as we began, a queue formed.
Children galore raced up, all windows occupied.
Peeking even had its own queue at one point..!
A family of 4.
Two 12 year olds.
A little girl with white wings.
Watching the lights come up. The events grow. The crowds swell.

“I could stay in there all night”.
“We always need to document everything, it’s nice to not do that in there, in a digital way.”

“So short, but allowed so much to happen.”

Around midnight, the typewriter seemed to be a bit of a challenge as people became tired.
We understood. We were tired too.

A pregnant woman was inside.
Her husband peeked through one of the windows.
They kissed.

“Who is aMoment, where can I find her?””I don’t know what I was expecting, but I didn’t expect that.” Grin.”I don’t think I should have written what I did.”
“Dude. That was awesome.” And a high-five.
“Wow. That’s the place I’d like to die in.”

Tears welling.
Dazed looks. Probably as much from us, as from you.

In the wee hours, things slowed down..though we never stopped.Meanwhile we fell a little in love with Uptown Brown. Thank you Mr Brown.

We think this sentiment was what many were thinking:
“thank you. I’ve been feeling a bit overwhelmed here. This is what I needed”.
aMoment from the fray…