The poetic & wise in Glenroy. 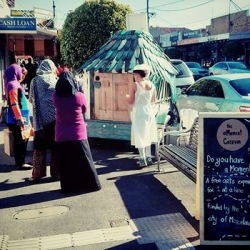 We had to cancel Saturday due to the rainy rain.
But, boy, did we luck-in with the sunshine on Monday!
And, boy, didn’t Glenroy’s people charm us!

Before the caravan was even set up, there were people buzzying around wanting to get in.
Two women in burkhas were our first visitors.
The first woman was particularly moved. “God bless” she said as she left…
We knew from then on it was going to be a special day.
Then a woman on a bicycle decided to be late in favour of having a moment.
(hooray we said to ourselves)
She, a talker, told us her daughter studied circus and was now a hypnotherapist.
She also uttered the words “not on this earth” while listening to the first track…

3 quiet children, 9, 10 & 13ish.
Home schooled & insightful. All responding with “that was awesome!” in chorus.
Then more children.
Alone and in pairs.
All very independent and their eyes a little wider as they left.

A 7yr old, who I’d misjudged & thought was older, revealed to me that she couldn’t read or write. Within the caravan I sat with her, reading the words of others & being her scribe.
She gave me my own moment, she did.

A man needed much persuasion to enter, then stayed within the longest of anyone.
His friend didn’t enter but we talked about travel and our favourite cities.
“I want to go to Paris. No one doesn’t like Paris,” he said.

A man from Vietnam wearing painting gear and blundstones exited & shook his head:
“within my culture, we reflect a lot. We do this all the time.” We continued talking and he said:
“What is the point? Why be rich, like a doctor? school then work hard. Why we do this? The planet could end. We die.”
and
“We are all brought up differently. We have different cultures, ways to be. But, we are the same too.” 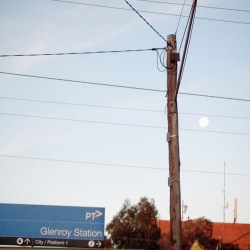 And as it began to get darker and the moon watched over us.
A man from Papua New Guinea sat beside us.
He talked of work. Of time off.
And how his favourite thing to do was to get on any train and get off at a place he didn’t know and just explore….

Thank you Glenroy. you have been the most open and welcoming nook we’ve been to ever I think.

This entry was posted in Uncategorized. Bookmark the permalink.

2 Responses to The poetic & wise in Glenroy.